Home Acne Durhing’s Disease Or Dermatitis Herpetiformis Who Is At Risk?
Acne

Durhing’s Disease Or Dermatitis Herpetiformis Who Is At Risk?

Durhing’s Disease Or Dermatitis Herpetiformis Who Is At Risk?

Durhing’s disease’s exact cause is unknown, but it has shown that it could be caused by genetics, gluten sensitivity, or autoimmune disorders.  It can occur in both men and women though it tends to be more likely to affect males.  It can’t be diagnosed without a doctor.  This rash usually becomes present between the ages of thirty and forty.  Though this skin rash is chronic some people with it notice skin flare ups where the rash will come and go.

There are some distinct symptoms that go along with Durhing’s disease.  It is a rash that can be found on elbows, knees, buttocks, lower back, scalp, or shoulder blades.  It can also even affect the enamel on your teeth.  The rash can have a burning or stinging sensation.  The rash will look as small clusters of small red bumps that are extremely itchy.  The sores can look like hives, raise sores, or even be like blisters, that are fluid filled.  The rash will sometimes start to heal after one to two weeks but new sores will start to grow in their place.  Flare ups when a person has eaten gluten can occur and when on a strict gluten free diet the rash can go away for awhile.  Flare ups can have months or years in between them.

Diagnosis of Dermatitis Herpetiformis relies on a doctor’s diagnosis.  It can sometimes be misdiagnosed as eczema.  If you haven’t been diagnosed with Celiac’s disease or a gluten intolerance at the time of diagnosis your doctor will test you for Celiac’s disease as well.  To diagnose for Dermatitis Herpetiformis your doctor will do a skin biopsy.  They will perform a punch biopsy.  To do this they will numb the area where the rash is infected, then they will take a biopsy tool that looks like a cookie cutter and punch a bit of the skin out.  This will leave a hole where the skin was popped up but the doctor will suture this and it will heal with no issue.  Your doctor will then send the biopsy to the lab to be tested.  Make sure the doctor you pick to test you for Durhing’s disease has diagnosed a case before so that misdiagnosis doesn’t occur.  To test for Celiac’s disease all your doctor will have to do is take a blood test.

If your punch biopsy comes back stating that you have Duhring’s disease there are a few things you can do that will help lessen the symptoms.  Your doctor will first suggest that you go on a Gluten free diet.  The lesions usually go away with a complete Gluten free diet.  Your doctor can also put you on antibiotics, and Dapsone. Dapsone used orally can help with symptoms as well.  If the itching is unbearable you can use a topical cortisone cream.

This is a chronic skin condition.  So even though treatment and a Gluten free diet helps control flare ups they won’t ever completely go away.  Flare ups can happen and will on occasion.  Make sure to reach out to your doctor if the flare ups get worse or occur more often.  The exact cause of why some people get Duhring’s disease is not known.  Though it shows that it is an autoimmune disorder from digesting Gluten.  Gluten free diet is just  part of treatment though to get relief from pain and itching you will need oral or topical antibiotic creams.  There are less than 200,000 cases of dermatitis herpetiformis making it very uncommon which is why it can be easily misdiagnosed. 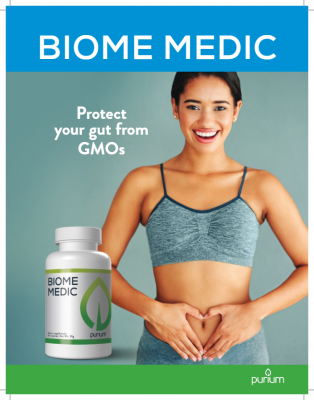 Protect your gut from GMOs with this exclusive and proprietary formula of all-natural ingredients. This product can help flush harmful toxins, support “good” bacteria and repair your microbiome.